NEW! Take our quiz to find the right supplements for you...
Trustpilot
Skip to content

Boswellia, also known as frankincense, is an aromatic tree species found growing throughout arid regions in the Middle East. The resin within the tree is a popular supplement for its long list of benefits on the human body, most notably its anti-inflammatory and antioxidant effects.

What Is Boswellia Serrata?

Boswellia, also known as frankincense, is an aromatic tree species found growing throughout arid regions in the Middle East. The Boswellia tree is well equipped for surviving the harsh desert. It produces a sticky resin rich in essential oils. These oils keep the plant cool by evaporating under the scorching sun. This resin is also a popular supplement for its long list of benefits on the human body.Boswellia supplements are used for its anti-inflammatory and antioxidant effects. Traditionally, the resin was used to treat arthritis, digestive problems, infections, and liver disorders.

The Science Behind Boswellia Serrata

Boswellia resin is rich in bioactive compounds — none as highly regarded as the Boswellic acids.The most abundant of the Boswellic acids is something known as AKBA — which stands for acetyl-11-keto-beta-boswellic acid. Over the past couple of decades, there’s been an increasing interest in this compound by scientific researchers looking for new forms of treatment. During this time, we’ve learned a lot about the benefits of Boswellia overall.1. InflammationBoswellia has a lot to offer the human body — primarily revolving around its powerful anti-inflammatory effects.Inflammation is an incredibly complicated process, involving the orchestration of dozens of inflammatory messengers, immune cells, and enzymes.Two enzymes, COX and 5-LOX, act as regulators for the entire process. They’re tasked with manufacturing the chemicals that make inflammation happen.Boswellia can inhibit these enzymes — effectively bringing the inflammatory process to a halt. Its anti-inflammatory effects are one of the main reasons why Boswellia has so many uses. Inflammation has been shown throughout a body of scientific research to play a key role in conditions such as:• Depression• Dementia• Alzheimer’s Disease• Arthritis• Atherosclerosis• Heart disease• Diabetes2. AntioxidantFree radicals are abundant in our environment. We breathe them in, absorb them through the skin, and consume them in our diet. We even create our own oxidative byproducts from normal cellular function.These oxidative compounds wreak havoc on the body if left unchecked. They dismantle the molecules that make up our cells — eventually causing them to break down and die.The body has antioxidant systems in place to protect us from this damage — however, in many cases it isn’t strong enough to keep up with the sheer number of these compounds in our environments, and in our bloodstream.One of the most profound benefits of Boswellia is the high concentration of antioxidant compounds in the resin. They work by taking the hit from the free radicals so they can’t go on to damage our important cells.Antioxidants are extremely versatile in their effects. They’re often used to speed muscle recovery after a workout, support cognitive function well into old age, and protect us from the harmful effects of environmental toxins and free-radicals.3. Cognitive HealthThe Boswellic acids in Boswellia have the unique ability to cross the blood-brain barrier. This allows the herb to deliver its beneficial effects directly within the brain — lowering inflammation, protecting the delicate neurons from oxidative stress, and more.Although there’s no evidence that Boswellia improves cognitive function in the short-term, it’s suspected to offer profound benefits over the long-term through its protective effects.People around the world are taking this supplement as a supportive agent for optimal cognitive health — especially during times of excessive stress or head injuries, and for the elderly.

Is Boswellia Serrata The Supplement For Me?

Boswellia is a broad acting supplement with many different uses.Where it shines above the crowd is with inflammation. The unique ability to block key inflammatory regulators gives it powerful benefits.People suffering from joint pain, digestive tract dysfunctions, and muscle and joint injuries should be considering Boswellia more seriously.The cognitive supportive effects make it useful for people looking to support their mood and protect the brain and spinal cord from age-related cognitive decline.Most people use Boswellia in the short-term the same way they would an Aspirin — which uses the same mechanism for stopping inflammation. 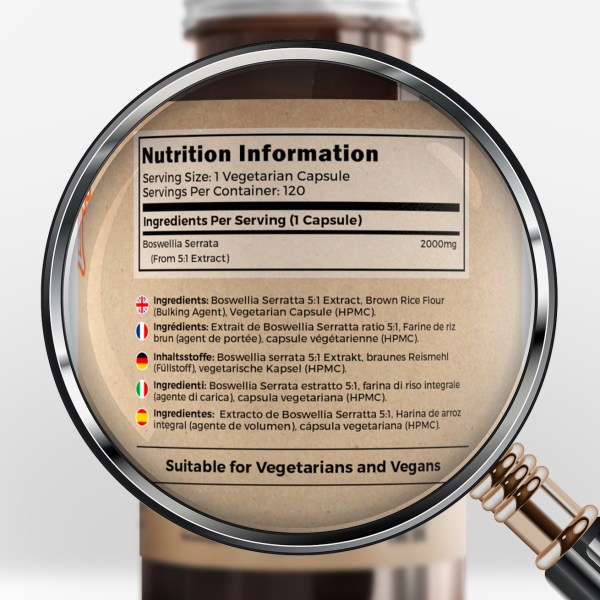 First time using this company, no complaints, prompt delivery. The product itself seems to be good quality and value.

Delivery was very quick with no issues. I don't know if the product works yet as I'm taking it over the week and its too early to say got it for my IBD .

I have just purchased this product from Amazon and will try it out for a couple of weeks. I have chosen this one as have seen it has the best rating as well as good dosage.

I decided to purchase Boswellia on the recommendation of Patrick Holford in his excellent book "Say No to Arthritis" and have high hopes of it helping reduce pain and inflammation in my joints. He describes it as a natural, very powerful anti-inflammatory agent, without the side effect of drugs. It may be the ultimate gift for an arthritic friend.

I have been using few supplements from FS since few months, due to unidentified infection. Enlarged lymph nodes are slowly shrinking and and i'm not so prone to getting colds etc. anymore.