L-Theanine and Caffeine are a match made in heaven. The stimulating benefits of caffeine can’t be underestimated — helping us work harder and longer than ever before by offsetting mental fatigue. L-Theanine perfectly compliments caffeine by eliminating most of these side-effects with its relaxing qualities.

What Is Caffeine & L-Theanine?

What Is Caffeine?Caffeine is the chemical responsible for the stimulating effects of coffee and tea. There are a few other herbs that contain this ingredient as well, such as yerba maté and guarana from South America, or the kola nut from Africa.Caffeine is the most widely consumed stimulant on earth. Billions of people consume coffee or tea on a daily basis around the world. Others use caffeine supplements instead.Ultimately, the motivation to take caffeine is the same no matter where the caffeine comes from — to induce a state of wakefulness.People often use caffeine to provide that extra kick in the morning or delay the onset of fatigue at the end of a long day.What Is L-Theanine?L-Theanine is an amino acid analog produced in the tea plant (Camellia sinensis). It’s responsible for producing green teas relaxing benefits and gives high-grade tea its pleasant umami flavor.Early on, tea growers noticed that tea plants grown out of direct sunlight had a better flavor, and induced a state of relaxation and heightened mental clarity. This eventually lead to the isolation of L-Theanine in shade-grown tea leaves.People now use concentrated L-Theanine as a nootropic for inducing states of heightened mental clarity and relaxation without causing the user to become overly sedated.
The Benefits of Mixing Caffeine with L-Theanine:L-Theanine and Caffeine are a match made in heaven.The stimulating benefits of caffeine can’t be underestimated — helping us work harder and longer than ever before by offsetting mental fatigue. But there are some unfortunate consequences to this effect — primarily symptoms like anxiety and muscle jitters.L-Theanine perfectly compliments caffeine by eliminating most of these side-effects with its relaxing qualities. Many have reasoned that the relaxing effect of L-Theanine would offset the benefits of caffeine – but this simply isn’t the case.L-Theanine can reduce the side-effects of caffeine without limiting the effects of the caffeine itself.

The Science Behind Caffeine & L-Theanine

Both caffeine and L-Theanine have been shown to improve focus and concentration through separate mechanisms.Caffeine works primarily through its ability to stimulate the brain and induce a state of wakefulness when we would normally feel tired or mentally fatigued.The effects of L-Theanine are a little bit more complex and researchers are still striving to understand exactly how L-Theanine is so useful for promoting a state best described as a “clear headed focus”.Studies on L-Theanine were conducted with the help of a device capable of measuring electrical activity in the brain – known as an electroencephalogram (EEG). These studies have repeatedly shown that L-Theanine can induce what’s referred to as alpha- brain wave activity. Past research involving EEG machines have shown that alpha brain waves are associated with productive learning, as well as states of alertness but mental relaxation.Conversely, beta wave activity is correlated with states of anxiety, stress, and conflicted mental processing, while theta waves are only present while we’re asleep or in deep meditation.The ultimate goal while studying or working is to enter a focused state involving alpha brain wave activity.

2. Reducing the Side-Effects of Caffeine

Caffeine works by outcompeting a compound in the brain known as adenosine.As we go through our day, adenosine levels begin to build up in the brain as a result of normal neurological processes. As adenosine levels rise, it causes the electrical activity in the brain to slow down, making us feel tired.Caffeine blocks the effects of adenosine to delay the onset of fatigue in the brain.Additionally, caffeine activates our adrenergic receptors in the brain. These receptors cause direct stimulation throughout the body, causing our heart rate to increase, muscles to contract, and forces our brain into a state of activation and stimulation.Too much adrenergic activation can make us feel anxious and causes our heart to feel like its missing beats or is about to beat straight out of our chest.The most abundant stimulatory neurotransmitter in the brain — glutamate — is activated by the adrenergic effects of caffeine. It’s the neurotransmitter responsible for carrying out many of the effects triggered by caffeine.L-Theanine is perfectly equipped for offsetting these side-effects because it resembles the shape of glutamate very closely — close enough to bind to glutamate receptors, but not close enough to activate them.In basic terms, L-Theanine does what Caffeine does to adenosine, it out competes it by taking residence on the receptors to block its effects.The result is an inhibition of adenosine (and therefore sleepiness) from the caffeine, without the side effects of excessive glutamate activation.

Is Caffeine & L-Theanine The Supplement For Me?

Billions of people around the world are using caffeine on a daily basis – but only recently have people started to combine L-Theanine along side it.Almost anybody who uses caffeine can stand to benefit from the caffeine + L-Theanine combination – especially people who commonly experience negative side-effects from the caffeine.The combination of caffeine and L-Theanine supplements are most popular among students cramming for exams, freelancers working long hours to complete a project, or trade workers who need to stay sharp and focused throughout the day.This combination is also popular among people who want the benefits of caffeine, but don’t like the taste of coffee or tea. 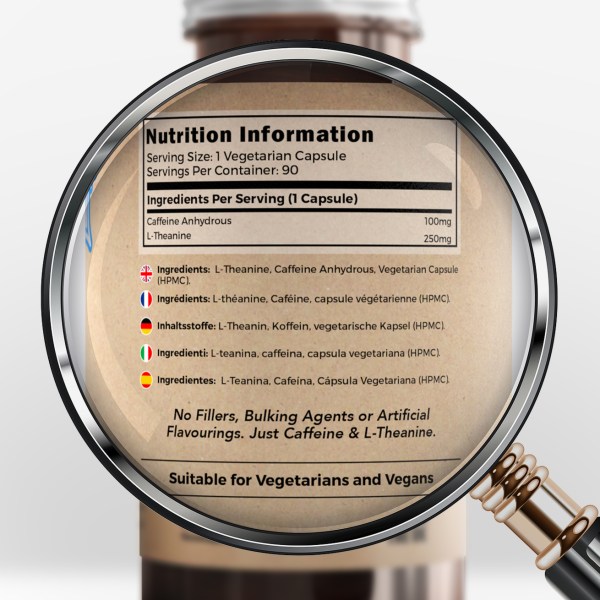 I've been taking one capsule in the afternoon for 7 days now and the improvement in focus is undeniable. I start my day with a large cup of coffee, mixed with 1/2 scoop of pure L-Theanine and take one caffeine/l-theanine cap in the afternoon. The focus is very clean and I feel more relaxed at the same time. I've heard that L-Theanine can also influence the intensity of dreams. Since I started taking L-Theanine regularly, the dreams became more scattered with the scenery changing much more often (short bursts of different stories). I'm not sure I like this, but it's been only a week and I can't draw any conclusions yet.

I take two tablets - one first thing in the morning and one in the afternoon. It definitely helps me stay awake and is very useful during study and work.

I use those whenever I need a bit of a caffeine boost, no jitter, it's great! PS: You guys might want to add some more glue to the cap, as the paper inside it is not very stable.

I like the product very much and I quickly noticed an effect. The design of the pack is also very appealing and the shipping was very good. I would buy it again.