Pterostilbene is a close relative to Resveratrol – the superstar antioxidant found in red wine.Like Resveratrol, Pterostilbene is a potent antioxidant. It’s found in many different plants but is most abundant in blueberries. Scientists believe plants manufacture this compound and others like it to protect them from bacterial and viral infection.A lot of people are starting to swap out their Resveratrol supplementation in preference of Pterostilbene. Compared to Resveratrol, Pterostilbene is better absorbed by the digestive tract and offers stronger antioxidant activity.People are aptly referring to it as “better Resveratrol”.Supplementing Pterostilbene is done primarily for its ability to protect us from oxidative free radicals abundant in our environment and diets. This, combined with other benefits makes Pterostilbene an effective neuroprotective agent, nootropic, and longevity enhancement supplement.The Main Benefits of Pterostilbene Include:• Powerful antioxidant.• Mild cognitive enhancer.• Supports longevity by protecting our DNA from oxidative damage.• Prevents age-related cognitive decline.• Supports liver function.• Protects the integrity of the blood-brain barrier.• Supports glucose metabolism.

The Science Behind Pterostilbene

Many of the benefits of Pterostilbene can be traced back to its antioxidant profile – which is impressive, to say the least.Oxidative damage is a real problem for all life on earth. The main side-effect of oxidative damage around the body is expedited ageing processes.Pterostilbene potent antioxidant capacity allows it to neutralise these free radical compounds before they have a chance to cause damage to the body. For this reason, it’s often marketed as an anti-ageing supplement.Some of the side-effects of oxidative damage include:• The skin loses its elasticity and integrity.• The internal organs stop working as efficiently.• The chances of cancer forming begin to increase.• We can become systemically inflamed.• Neurons begin dying, affecting cognitive functions like memory and mood.• Our immune system becomes less effective.

All three energy sources the body uses is derived from either sugar or fats.Glucose metabolism is the carefully orchestrated process of converting the glucose from our food into useable energy. We need to keep careful control over the way the body uses, and stores glucose.If we have too little glucose (hypoglycemia), our cells lack the energy they need to function – leading to weakness, fatigue, and coma.Conversely, if we have too much glucose (hyperglycemia) it can start to cause oxidative damage to our blood cells, and small blood vessels in the kidneys, lungs, extremities, and brain. This can be devastating to the body, leading to kidney failure, lung damage, or destruction of the neurons in the brain. This is the main concern for people with diabetes, which by definition is an inability to control blood sugar levels.Pterostilbene has been shown to reduce hyperglycemia in mice by as much as 14%. In other animal studies, the effects of Pterostilbene for controlling blood sugar levels were so strong it resembled the same level of effects as the diabetic medication metformin.

Oxidative damage and neuroinflammation are considered to be some of the main causes of neurological damage, especially in the elderly.This inflammation often starts elsewhere in the body – such as the cardiovascular system, joints, or the digestive tract. Inflammatory markers produced in these regions travel around the bloodstream, triggering inflammatory processes elsewhere in the body – such as the brain.Therefore, one of the best means of protecting the brain from degeneration is to reduce the level of inflammation and oxidative damage occurring within the brain and the blood-brain barrier.Pterostilbene offers powerful antioxidant protection all around the body, including the brain — thus offering protection against the resulting inflammatory processes that follow.

Is Pterostilbene The Supplement For Me?

Pterostilbene has a lot of applications. One of the most popular uses of this supplement is as a general health supplement for protecting the body from oxidative damage, blood glucose dysregulation, joint pain and inflammation, and premature ageing.A lot of people start taking antioxidants like Pterostilbene or Resveratrol on a daily basis in their 40s or 50s as a way of slowing or preventing the onset of cognitive decline that often comes with age.Athletes may choose to take Pterostilbene to speed recovery, and reduce exercise-induced joint pain.

Amount Per Serving (2 Capsules):
Pterostilbene (100mg).
Ingredients: Pterostilbene, Rice Bran (Bulking Agent), Vegetarian Capsule (HPMC).
Recommended Dose
Take 2 capsules daily with a meal, or as advised by your healthcare professional.
When being used alongside Trans-Resveratrol, roughly a 2:1 ratio in the favour of Trans-Resveratrol should be used. 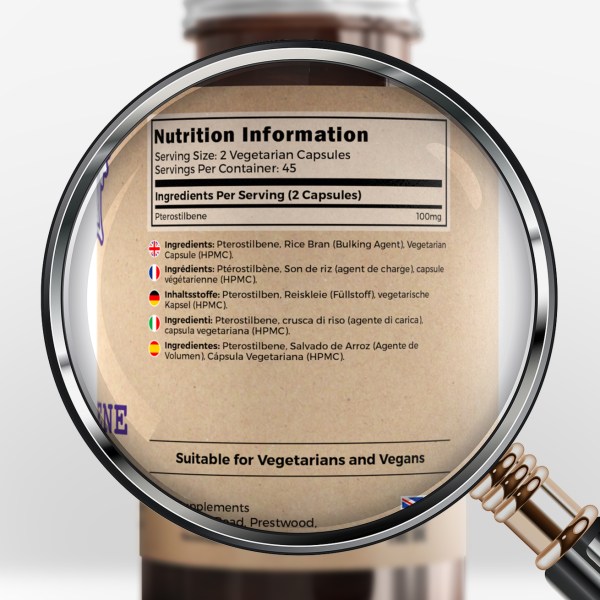 A very powerful anti-oxident which I use to cleanse the body twice a week.

I have only received it but happy with the product so far. I bought it to take alongside nicotinamide riboside for Fertility and anti ageing benefits.

Good quality product at an affordable price. I take this as part of an anti-aging regiment in combination with nicotinamide mononucleotide inspired by the work of David Sinclair.

This product made me more focussed and alert. It also seemed to lift my mood. I read that it is more bioavailable than resveratrol and felt the benefits after 2 weeks of taking it.