This health supplement features a synergistic combination of saw palmetto, pumpkin seed and nettle leaf – to help reduce symptoms of an enlarged prostate.

What is Prostate Complex?

This health supplement features a synergistic combination of saw palmetto, pumpkin seed and nettle leaf – all of which have been shown to help reduce symptoms of an enlarged prostate and provide relief from frequent and painful urination.In most men, the prostate gland normally grows in size as the body ages. This may be brought about by changes in sex hormone levels that take place with normal ageing. It occurs when prostate gland cells multiply, causing the prostate gland to swell and cause difficulty in urinating. Incomplete bladder emptying, having a frequent urge to urinate at night, urine leakage, or a weak urinary stream are just a few symptoms of an enlarged prostate gland.

The Science Behind Prostate Complex

This complex contains seven active ingredients, each offering a separate benefit to the male reproductive organs — namely the prostate.

Nettle leaf is a rich source of trace minerals and vitamins, including zinc, B vitamins, and selenium. This herb has a long history of use for maintaining the health of the prostate, especially in older men.

Broccoli is rich in a compound called lycopene — which is a powerful antioxidant with a particular focus on the prostate tissue. It’s used as a protective agent for men with a history of reproductive dysfunction.

The chemical structure of beta-sitosterol is similar to cholesterol (both are in the sterol class of substances). By mimicking cholesterol, but without being able to exert the same influence, it’s able to competitively inhibit the substance. By reducing excess cholesterol, it’s thought that compounds like beta-sitosterol could reduce the concentration of dihydrotestosterone (which is made from cholesterol) — which is the primary cause of prostate issues in older men.

Lycopene is a powerful plant-based antioxidant. It’s associated with a reduced risk of prostate issues, as well as a variety of other health conditions affecting the male reproductive system.

Both men and women need zinc to live, but men use it at a higher rate than women due to its role in sperm production. When zinc levels are low, it can lead to a cascade of reproductive disorders if not promptly corrected.

Is Prostate Complex The Supplement For Me?

This supplement is designed specifically for men. The ingredients in this formula are centered around supporting the prostate gland, which is a small gland located just below the bladder. Its sole responsibility is to produce the seminal fluid that combines with sperm during ejaculation.

This gland is highly sensitive to male androgens and can become enlarged later in life. Because of its integration with the urethra, enlargement of the gland can lead to issues with urination. 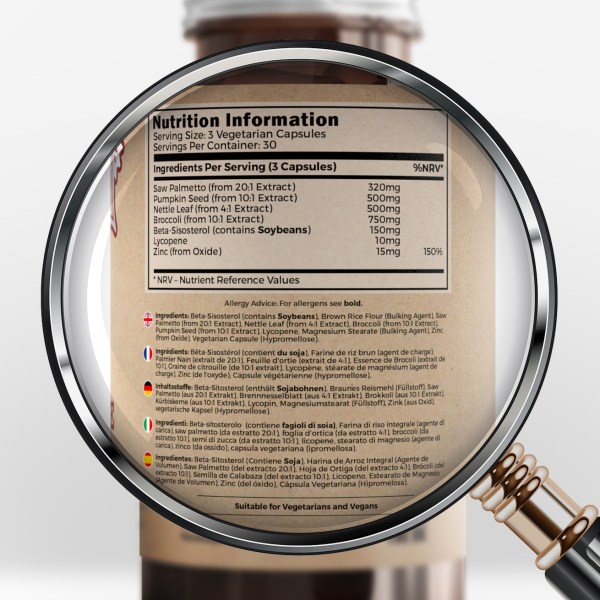 Hi Giuseppe, Great to hear! Thank you so much for taking the time to leave this review, we really appreciate it. Thanks, The Focus Supplements Team

Hi there, Thank you for taking the time to leave a review of our Prostate Complex. Great to hear that you are happy with the service! Thanks, The Focus Supplements Team

Purchased for my partner who has a few significant prostate problems. His initial reaction was sceptical, but after a couple of weeks commentates that he was only having to get up once a night, instead of up to four times! As a result, he asked me to purchase again on a regular basis!

Hi there, This is brilliant to hear, we're so pleased that your partner is having such a positive experience with our prostate supplement. Thank you for taking the time to leave us this feedback. Thanks, The Focus Supplements Team

Definitely helps, I am no longer getting up at night several times having to go to the bathroom. Product was delivered was fast, as usual.

United Kingdom
Product has no side effects

I suppose it is working I’m taking it for prevention I suppose I’ll find out in 15 years or so if it did the job pr not. Dark bottle to keep the sun goblins away screw top to gremlins out and transparent capsules with a brown powder inside.